Darwin alumna honoured by both University and College 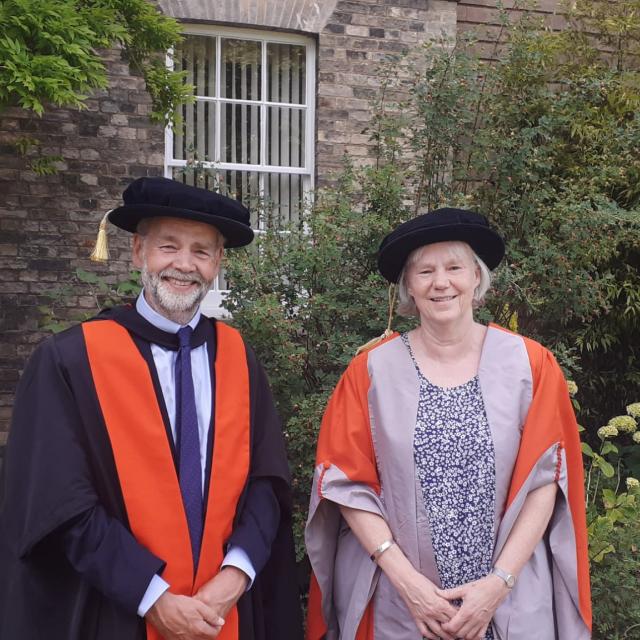 In a double celebration, distinguished developmental biologist and Darwin alumna Professor Elizabeth Robertson FRS received the degree of Doctor of Science honoris causa from the University of Cambridge. She was also admitted as an Honorary Fellow of Darwin College.

Professor Robertson completed her PhD at Darwin in 1982 and continued as a researcher in Cambridge before holding positions in Columbia, Harvard, and latterly, in Oxford, where she is Professor of Developmental Biology and Wellcome Trust Principal Research Fellow. She was elected a Fellow of the Royal Society in 2003. Known for her innovative work on mouse genetics, she was awarded the Royal Medal by the Royal Society in 2016 “for her innovative work within the field of mouse embryology and development, establishing the pathways involved in early body planning of the mammalian embryo.”

Professor Robertson said: "Making important science discoveries is very much a team effort and the award of this honorary degree recognises the contributions and support of the large group of talented individuals I have been lucky to work with over the course of my career.  I am also delighted to be re-joining the Darwin College community after a gap some four decades, and already looking forward to many future visits.”

Master of Darwin College, Dr Mike Rands said: "It is a pleasure to see a Darwin alumna honoured today by both the University and the College. Professor Robertson’s work places her among a succession of distinguished biologists who have completed their doctoral studies here at Darwin before going on to advance the frontiers of science."